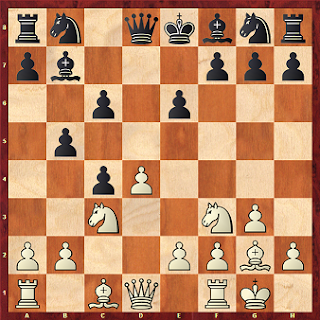 Last night, I popped into the North Sydney RSL club where they were having the Norths CS Purdy Memorial competition (which runs for over 2 months).

I was there helping David Webster to setup the boards etc. It was with great pity that I did not bring my camera last week as Purdy's wife was there with his son to signal the start of the inaugural John Purdy Memorial.

To people unfamiliar with John Purdy, the wikipedia link below will cover the impact and influence that John Purdy has here in Sydney. He is of course, the son of CJS Purdy, the world correspondence chess champion.

Out of all the games, one game caught my particular attention. It was the game on Board 15.

It was extremely pity that I had to rush off at 8.15pm and I could not see how the game progressed or even who won.

Before I left, the position on the board look like this (Black to move).

This is of course one of the main lines of the Semi-Slav: Noteboom variation (via the Catalan move order).

Whatever happens in this position, we are bound for an interesting fight. White must prove that there is compensation for the lost pawn. Black at the expense of tempi, must quickly organise the forces as it is severely behind in development.

Play continued with 1....Nf6. A slight inaccuracy. The problem herein is that White intends to liberate the bishop on g2 by playing Ne5. As a result, Black must counteract this with 1...Nd7 followed by 2... Qc8. Another piece development on the queenside (lagging even further in development). In the event of 2. Ne5. Black must be wary of a tactical trick to regain the lost pawn with 3. Nxb5 (cxb5 results in the immediate 3. Bxb7 - Black would then be in more trouble strategically because the light squared bishop has no equal on the board).

In fairness, the position is extremely unbalanced. Black must tread water (as a result of playing so sharply) and middlegame play is typically complex with chances for both sides. White therefore must start to attack and press on with the initiative because once Black regroups, a deadly queenside pawnstorm is usually decisive.

In case anyone is wondering, I had look at this line before my long layoff from chess and it was part of my repertoire (yes, I play the Semi-Slav as Black) and hence my familiarity with it.

For enthused readers who want to know more about this variation, I encourage you to pick up the book The Triangle System by Ruslan Scherbakov from Everyman. Be warned, it is not for the faint-hearted. :)
Posted by tanch