The Fascination With Tal 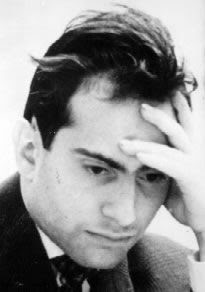 Why are chess players so fascinated with the 8th World Champion, Mikhail Nekhemievich Tal?

He was, after all, only World Champion for a year before being defeated by Mikhail Botvinnik in the rematch and has never since then managed to reached the same heights ever again.

What is it about him that makes him so affable and well-liked?

Before Tal's appearance on the world stage, chess was considered by many to be methodical. Little did the world know that the young Latvian from Riga would soon set the world alight with his daring imaginative sacrifices and unbelievable attacking combinational skills.

In modern times, if he had been in good health, he would have been the equivalent of golf's Tiger Woods. Tal didn't just make chess interesting and fun again, he strapped a rocket to chess and launched it to the skies and the whole world sat up and took notice.

Never has the world seen such daring play before where material was sometimes abandoned in order to launch a crushing attack on his enemy's king. His pieces moved like magic and his play defied common chess logic.

If you do not have the book, The Life And Games Of Mikhail Tal (Cadogan Books), I strongly encourage you to go and get it. In the book, Tal describes his life experiences (up till 1975) in a manner that makes you feel as if you're having a conversation with a long-lost friend over a glass of wine after a nice dinner. It is one of the best chess literature ever written.

Tal doesn't give you long variations and sub-variations in his game notes like some authors do. He adds simple notes to explain his ideas, his plans. More importantly, he talks to you like a friend recounting his incredible journey.

Tal's play combined not only unrestrained imagination and incredible energy on the chess board but they typically entailed an enormous amount of risk. Tal would often stand precariously on the precipice of disaster and many a time, it would be his opponent who would capitulate first.

For example, in the Candidates tournament of Yugoslavia in 1959. Tal was playing Fischer. In that game, Fischer wrote down 22. Rae1 (the strongest move) before playing his move and pushed his scoresheet towards Tal to observe his reaction. Tal thought the better of it and knew Fischer was testing him. So Tal got up, walked around the board and proceeded to share a joke with someone. When he returned to the board with a smile, Fischer (who by then was obviously monitoring the whole scene) crossed out the move and played another move instead. In the end, Fischer lost. When Tal asked why he changed the move, Fischer replied,"Well, you laughed when I wrote it down!"

Tal was unfortunately afflicted with ill health. He had a diseased kidney and underwent 12 operations. But while such an ordeal would have crushed a lesser man, Tal continued to play chess at the highest levels irrespective of his health. His passion and love for the game was truly inextinguishable. 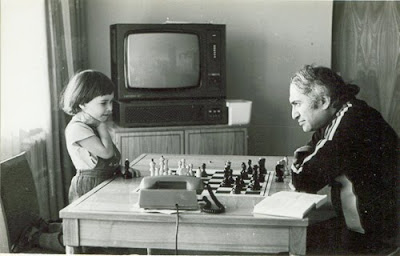 (Tal with his daughter)
This led to Leonid Stein to once comment,"You, Mishik, are stronger in spirit than all of us."
Posted by tanch